Did you know that almost 1 in 3 Americans have Thyroid Disease? And out of those people suffering from Thyroid Disease, almost 60% of them have no idea why their body seems to be betraying them? Symptoms of thyroid disease vary, but they are a big hindrance to feeling strong, healthy and happy.

And many, many other painful and frustrating symptoms.
More often than not, many thyroid patients go undiagnosed and suffer needlessly without answers! 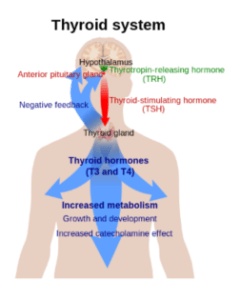 Furthermore, the treatments offered by conventional medicine to thyroid patients (i.e synthetic thyroid hormones, radioactive iodine, thyroid gland removal, and others) often leave people with residual symptoms and result in a progressive condition that continues to dominate their lives and leave them sick, exhausted, depressed and struggling with their weight.

Dr. Saber is personally and professionally well versed in handling any type of thyroid related problem, including hypo or hyperthyroidism, Hashimoto’s Thyroiditis, and Thyroid cancer. After seeing at least 800 people with thyroid disorders she is able to pinpoint issues rapidly so the patient can get better sooner! Call or email today to schedule your thyroid consult! 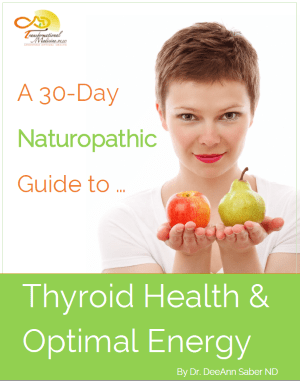 In this guide Dr. Saber will step you through a 30 Day journey to help improve your thyroid and boost your energy including:

Proven ways to improve your sleep to feel more rested

Nutrition facts and eating habits for a healthy Thyroid

The primary idea is to find the underlying cause of the Hashimotos that is causing thyroid dysfunction.

This means digging deeper than just looking at thyroid hormones through blood tests and giving medicine to “normalize” the lab values. One must find why the immune system decided to put out the autoimmune molecules in the first place.

Digging deeper means checking nutrient status – does one have enough B12, folate, Vit D3, on board? Do you have poor digestion, low stomach acid, gas and bloating? Are you commonly sick more than once a year or had a major illness in the last few years? Have you had a lot of stress in your life leading you to not sleep, nor eat well or to do too much alcohol? Have you been checked for small intestinal bacterial overgrowth or parasites? Do you have any viruses or been impacted by Lyme’s disease or molds?  Another underlying disorder contributing to Hashimoto’s can be environmental toxins. Clearing one’s diet of all genetically modified foods is a good start towards getting toxins out of your food supply.

What does Hashimoto’s disease do to your body?

It can cause hypothyroid like symptoms such as fatigue, cold hands and feet, hair loss, constipation, hoarse voice, depression, and the inability to lose weight. Puffiness under the eyes or face or neck area can be longer term effects. Thyroid impacts tendons and ligaments as well causing joint pain and aches. Additional symptoms are racing or pounding heart, anxiety, increased sweating with fatigue afterwards – this is when the thyroid cells are being attacked by the autoimmune molecules either TPO or TGA – this attack opens up cells in the thyroid gland causing a release of hormones that then rev up our systems including the heart.

Because the thyroid gland has a finger in so many pots of bodily functions it impacts one’s overall health significantly. Here are some functions that are influenced by the thyroid glands: Bone metabolism, gastrointestinal function, male reproduction, gall bladder and liver function (can cause congestion due to slow processing even gallstones); decreased growth hormones, fat burning, sugar metabolism, and lipid production also brain chemistry because adrenal glands are sluggish causing depression, mood disorders, lethargy, and weight gain.

How serious is Hashimoto’s disease?

Hashimotos and hypothyroidism negatively impact many organs.  These disorders decrease the bodies detoxification pathways particularly the liver, kidneys, stomach, and skin. Hypochlorhydria or low stomach acid is often seen with hypothyroidism which contributes to heartburn and low protein metabolism and calcium dysregulation. Hashimotos can cause the heart to race or raises homocysteine levels which increases one’s risk for heart disease. Some doctors will say this person has an anxiety disorder so let’s treat them with anti-anxiety meds. Now they are unnecessarily drugged and still don’t feel better.

Additionally, Dr. Kharrizain and others have clinically seen that once a person has one autoimmune disorder, they are at higher risk to get others. There is a progression of attacks on various organs if the immune system is not healed. Pernicious anemia can be seen where B12 can’t be absorbed due to a breakdown of intrinsic factor in the stomach and duodenum, later the pancreas could be attacked looking like type 2 diabetes. If this goes on unchecked it can even cause brain issues such as issues with balance, motion sickness, nausea from focusing, and nausea or dizziness from flashing motions on a computer or TV or moving fans. A cerebellar autoimmune disease is likely the cause of gluten ataxia, where your brain gets inflamed from gluten or thyroid antibodies because the blood brain barrier is damaged, much like the gut… leaky gut can lead to leaky brain.

What not to eat when you have Hashimoto’s?

One should avoid all gluten and wheat containing products. It’s estimated that 43% of Americans are genetically predisposed to Celiac disease, and 81% are predisposed to gluten intolerance. These foods inflame the gastrointestinal lining thereby causing the cellular junctions to expand which causes “leaky gut”. This means gluten molecules are now in the blood stream where the body will consider them as invaders and began an attack to clear them out. Because the thyroid antibody molecules are so similar in size and shape to the gluten molecule every time the immune system mounts an attack on gluten it also attacks the thyroid. And this immune reaction can last for up to 6 months so eating a little bit of gluten now and then still causes thyroid damage.

Dairy and eggs are common allergens that cause inflammation and can contribute to all immune disorders.

What is the difference between Hashimoto’s disease and hypothyroidism?

Hashimotos is an autoimmune disease where your body makes molecules that attack the thyroid gland. Hypothyroidism can be the effect of this autoimmune disorder or not. Both can cause the following symptoms: Fatigue, weight gain despite adhering to a low calorie diet, morning headaches that wear off as the day progresses, depression, constipation, hypersensitivity to cold, poor circulation even numbness in hands and feet, muscle cramps at rest, increased susceptibility to colds, flu’s and various infections; slow wound healing, excessive amounts of sleep required to function, chronic digestive problems, itchy, dry skin, dry to brittle hair that falls out easily, low temperature, pulse and/or blood pressure, edema (especially the face), loss of outermost portion of eyebrows.

Many things cause the thyroid gland to weaken or be depressed in its function such as; irregular immune problems stemming from the gut, adrenal dysfunction, poor blood sugar regulation, gut infections (such as a bacterial or parasitic infection) or hormonal imbalances. When one’s healthy gut bacteria are decreased or damaged due to diet, antibiotics, stress, illnesses then the amount of T4 conversion to T3 is decreased. We also see gluten-intolerance or Celiac disease, estrogen surges, insulin resistance, polycystic ovarian syndrome, vitamin D deficiency, environmental toxicity, and chronic inflammation as components impacting the immune system.

Estrogen fluctuations can trigger Hashimotos particularly after pregnancy or during perimenopause when estrogen is going up and down. If one has Hashimotos it can mimic symptoms such as hot flashes, nervousness, anxiety, irritability and insomnia.

Ruling out insulin resistance and polycystic ovarian syndrome is important as they can trigger autoimmune disorders including Hashimotos. Insulin resistance promotes inflammation which then impacts the gut which is the majority of your immune system.

Does Hashimoto’s cause weight gain?

It can impact ones metabolism so fat burning is turned down thereby not allowing the body to lose weight. It can also cause weight loss if the Hashimoto’s disorder is severe.

Does Hashimoto’s make you tired?

Yes and so does hypothyroidism.

Can Hashimoto’s turn into cancer?

It’s a very rare complication, but Hashimoto’s thyroiditis may increase your risk of developing a specific kind of thyroid cancer known as thyroid lymphoma. Thyroid lymphoma is highly treatable and curable when it’s detected early on. That’s why it’s so important to pay attention to any thyroid nodules (or thyroid lumps) and get them examined by your doctor as soon as possible.

Can you die from Hashimoto?

Is coffee bad for Hashimoto’s?

Possibly – especially if it is caused by adrenal fatigue. The adrenal glands make adrenaline and caffeine in any form can also rev up our system in the way adrenaline does increasing our fight, flight or freeze response.

Can I eat eggs if I have Hashimoto’s?

It’s best to avoid them as they contribute to allergies and inflammation.

What is the best diet for Hashimoto disease?

Gluten and dairy free as well as soy and sugar free.

Can Hashimoto’s go away?

According to Dr. Kharrazian once a gene for an autoimmune disorder is turned on it can not be turned off; however it can be turned down or down-regulated so it causes less immune system stress and less thyroid tissue damage.

Viruses, like parasites or other internal infections cause the immune system to go into action mode to clear out these invaders. This response can be overdone or is difficult to turn off if we don’t have the proper internal molecules to do these jobs. So, we can say that viruses contribute to a cluster of issues that can cause Hashimoto’s but there is not one specific virus that causes Hashimotos directly.